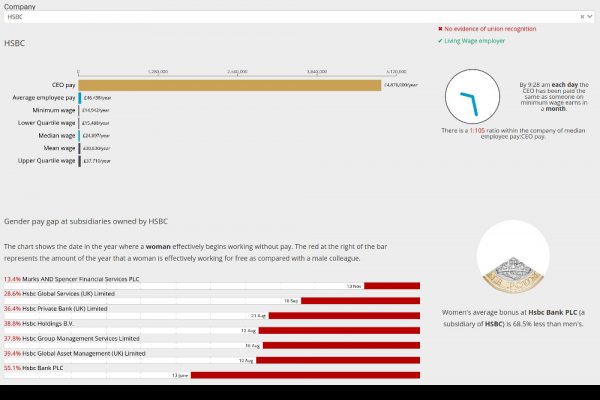 Interactive data tools and visualisations for the Equality Trust

"We would definitely recommend working with Rich, as he understands the pressures of non-profits and will always support organisations with realistic digital solutions, particularly where there is little in-house expertise. We have always found his communication is great, pricing is very transparent and appreciate his collaborative approach."

I'm pleased to have done a number of projects for The Equality Trust:

I enjoyed discussing how the message could be amplified and how the data could be made accessible, interesting and communicated to users. The animated data visualisation had an enormous amount of data for all the FTSE100 companies (and their subsidiaries). In attempting to show how excessive CEO pay is I chose to start off showing some average pay rates in the UK, including the median. This itself is interesting, but when you select a company it then adds the CEO pay to the barchart and animates up to the amount the CEO is paid, with the result that you see even the upper-quartile of pay disappearing to nothing. I also calculated a statistic like "By 9:28 am each day the CEO has been paid the same as someone on minimum wage earns in a month. " and represented this as an animated clock face. It's pretty shocking. To show the bonus pay gap between men and women, I animated a £1 coin pie chart. And to show gender paygaps we chose to show the point in the year that a woman effectively ceases to get paid compared to men at that company.

Technically, this is all done using Javascript and the VueJS library, which I'm a big fan of, and drawn using SVG. It was packaged as a Drupal module so their web team could easily install and place on where they wanted in their CMS.

The iParl extension is a classic example of how Open Source development and the Free Software movement can help the not for profit / campaigning sector. I originally created it for one client and published it for others to use too. Then later another client of mine wanted to use it, and funded some extensions to it. So in effect both organisations have ended up sharing the development costs. I know that other orgs are using it, too, which is great.

I really enjoyed my working relationships with Equality Trust; their staff are all so dedicated and knowledgeable and very nice humans too! We were able to iterate through the project, with both sides taking on feedback and contributing ideas. I look forward to future projects.